Norwegian animal organisation NOAH called us to join demonstrations against the massive wolves hunt in Norway this winter. We are very upset with the ongoing wolves extermination policy in Norway. We see it us a threat to the biodiversity conservation ideas not just in Norway, but all over the world. Our demonstration will take place near the Norwegian embassy in Vilnius on January 20, 2018.

The government of Norway is running the extermination policy that is aimed at keeping wolves population at a critical level permanently and as weak as possible. The Norwegian government has decided to kill altogether 42 wolves this winter, which means that 75% of wolves population found solely on the Norwegian territory will be wiped out. It seems this policy is based just on the economic interests of the hunters and landowners not to have any wolves in their land. This is the very same goal, which had led to the wolves’ extinction in most part of Europe in the previous centuries.

We encourage Norway as well as Lithuania to look for new ideas for coexistence with nature and new effective solutions for solving the conflict between wolves and farmers without extermination of wolves, but through technological advances and scientific knowledge.

We would like to share our work in the field of cohabitation of wolves and farmers: http://www.saugiavis.lt/en/ 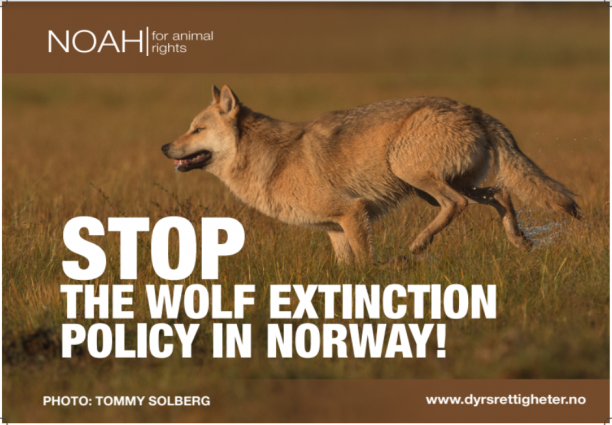